Stepping into the Salvatore Ferragamo Museum in Florence was a dream. American press dubbed Ferragamo “Shoemaker to the stars”. Pickford to Garbo to Crawford wore his creations on screen and off.

Born the eleventh of 14 children in the Southern Italian city of Bonito. After opening his first shop at age 9 in his hometown, Ferragamo left his native Italy in 1915 in a third class berth for United States to learn more about footwear. Opening his store in Hollywood in 1923, the boutique was a patronized by Hollywood Stars. Fame and fortune followed, the quality of his shoes garnered the shoe designer a reputation known for luxury. 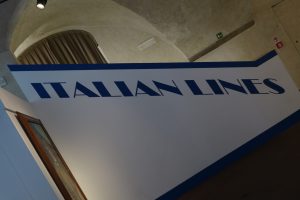 1927 was the year of Ferragamo’s First Class return to Italy on board the ocean liner Roma. Returning to his native country a very successful man, settling in Florence, the center of culture, style, and fashion. Purchasing the 13th century Palazzo Spini Feroni on the bank of the Arno River in the Piazza Santa Trinita, this would become the office and atelier of the privately held Ferragamo S.p.A.

I was given a personal tour of the Ferragamo Museum. Studying Cinema Costume in university, I came across the name Ferragamo often. It is a word I associated with the heydays of Hollywood Stars: Harlow, Monroe, Kelly, and Hepburn to name a few. Beyond the beauty of a shoe, I learned Mr. Ferragamo had an intellectual curiosity the body and footwear. He studied at University of Southern California as well as patented 400 inventions concerning shoe design.

The Museo Ferragamo is housed in the basement of the Ferragamo headquarters in Florence. 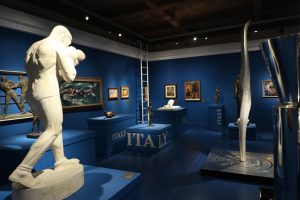 The museums exhibition is titled “The Return to Italy”. Ninety years ago Salvatore Ferragamo returned after 12 years in the United States. Creating a sense of being on an luxurious ocean cruise, the color palette was blue and white with the details of the ocean and sumptuous nautical travel. The presentation is spread over 8 rooms with each having a central theme. Room 3-Folklore and the Decorative Arts in Italy. Room 4-Italian Women. Room 5- “Industrious Florence of the 1920’s. Room-6 The Italian Home Room 7-The Body in Parts Room 8-The Body and Its Aesthetics. The exhibition is organized by Carlo Sisi.