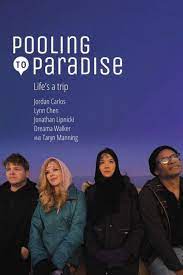 Indie Road Flick Pooling to Paradise is an engaging and often fun critique on contemporary living. Married mum and step-mother Jenny (Lynn Chen) plans to travel to Las Vegas for a professional Blogger conference. Involuntarily she chooses the Car Pool option on her app. This means she will subsequently miss her flight. Joining her in the car are Kara (Dreama Walker), Sean (Jonathan Lipnicki), and driver Marc (Jordan Carlos).

Such an inclined space demands our attention. It’s also interesting to see how characters play off one another. Here are four strangers at different stages in their lives. We have already learned that Jenny is a highly-strung mother. The younger Kara is a struggling and deluded actor. The even younger Sean wants to kill himself after breaking up with his girlfriend, Dawn (Taryn Manning). Meanwhile, driver Marc is a casualty of activist parents. He now drifts through life with the help of numerous narcotics.

During the trip they inevitably get to know each other better. At one point Sean pulls out a gun. However, he reassures everyone it’s to kill himself, despite not being loaded. Kara tries to convince everyone she’s on her way to stardom. Jenny constantly talks domesticity like everyone would somehow be interested. Marc, having undoubtedly been in this situation before, goes with the flow.

An increasingly distraught Sean offers to pay Marc to drive him to Dawn’s home in Paradise, Nevada. With Paradise being near Vegas, and that she’s already missed her flight, Jenny agrees to Sean’s plan. Kara, with nothing better to do, also agrees to this to help Sean.

Pooling to Paradise is worthwhile but does not contain an abundance of laughs. It is more of a light drama with funny moments that continually raises the bar. The fun is in getting to know these characters better. There are also regular respites as they leave the car at different points in the journey.

The denouement has Jenny speaking at a conference. This somewhat feel-good sentimental ending is out of synch with the tone of the film. However, this minor flaw aside, it’s worth staying along for the ride. Writer Caytha Jentis shows good pacing and sympathetic characterization, while the dialogue rarely feels scripted.