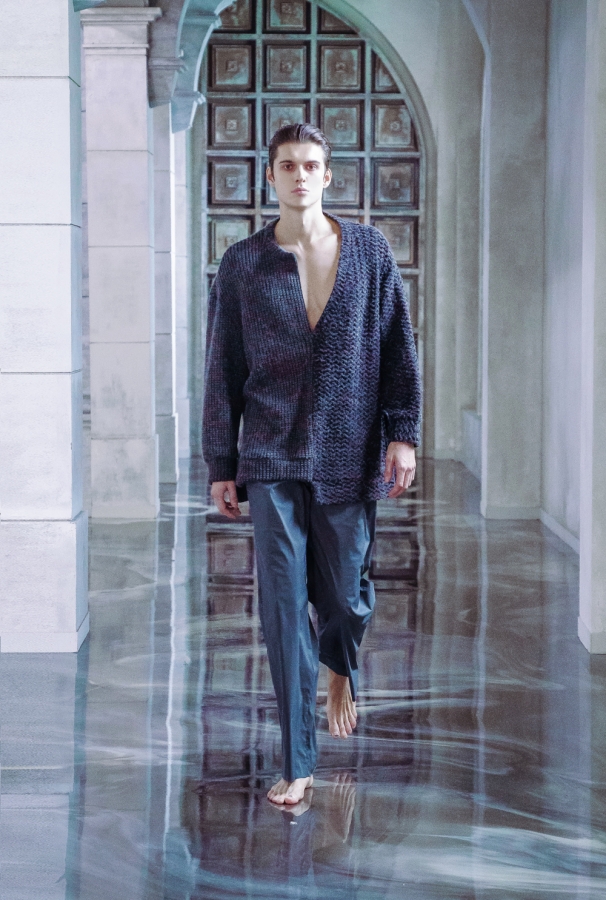 A Black and Paper exclusive interview with Korean Fashion Designer Avizmo Jo, creative head of De_caffeine homme. What attracted me to his brand were his outerwear pieces. I wanted to ask what inspires his designs and collections.

The looks for the Fall Outerwear, three buttons and lapel, where did you develop this idea?

Planning and inspiration for this season’s collection was the fabric flow that occurred
when the general form of clothing was raised tightly.
By organizing the form that was created so that there was no inconvenience to the human body once again, we confirmed that the interesting form appeared again and used it
as a detail of the collection.
In the main look jacket and coat, the center of the clothes is connected with a long zipper
so that it is locked to the bottom of just below the neck.
Buttons were used only as decorative elements to create objects that made the design more prominent.

Your SS21 menswear tops are not conventional, is there a statement behind this?

SS21 is a new reinterpretation of traditional Taylor jackets and shirt designs, which I think are also traditional in another sence.
Like our design philosophy, we acknowledged the beauty of traditional forms, changed it anew, and emphasized it again in a sharp and modern style.

Why did you design the SS 21 collection with symmetries in mind?

The reason why I chose asymmetry is because I think it’s interesting to see what happens when you wear disproportionately to the human body, with the weight of the fabric on both side and shoulder widths different.
The asymmetric collar of the shirt is also the same image.

Do you think men should take more chances with their style choices?

Yes. I think there should be no restrictions on men’s fashion. There will be a style that we can suggest for each individual’s individuality.

The 20th century art movement Dadaism, in the 21st century, what does this mean to you in terms of fashion?

The Neodadaism I seek is closest to the explanation that otally disconnect what was once a form of social role from its original location and at the same time, it is trying to confuse the value it has and then bring it into
the new value system.’
I think that recognizing, understanding and reusing existing roles here has a positive effect. Adding my design to a design with traditional values is creating new values and giving a new role.

Stay tuned for more interviews with global fashion designers on our web chat show “Before Tacky”.